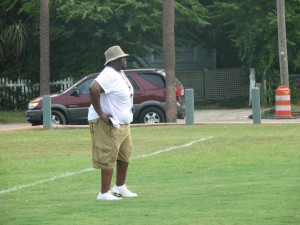 Coach Anthony Sterling has over 20 years of coaching experience as a Head Football Coach and Defensive Coordinator as well as a Head Track and Wrestling Coach. Coach Sterling is a native of Charlotte, NC. Anthony Sterling began playing football at a young age and this carried him through to North Carolina Central University where he was a team captain and All-CIAA lineman. Upon returning back to Charlotte, Coach Sterling began his career coaching middle school football, where in 10 years he led his team to 8 Mecklenburg County Football Championships. In 2006 he made the seamless transition from Middle School to the High School level as an Assistant Head Coach and Defensive Coordinator of both Olympic and West Charlotte High Schools. For the past seven years, Coach Sterling has been the Assistant Coach and Head Coach of Chester High School Cyclones. In his tenure, the Cyclones have won a region championship, a state championship title appearance and 6 playoff appearances. Coach Sterling has received Defensive Coordinator of the year, Coach of the year, and High School Sport Reports State Coach of the year. He has coached several Shrine Bowl Players and North South Players.

Coach Sterling’s motto is “Love the athletes hard and coach them hard”. In following this creed he has coached over 55 college scholarship athletes. A few of these athletes have gone on to play in the NFL. Coach Sterling is a member of St. Paul Baptist Church, Fellowship of Christian Athletes, The Council for Exceptional Children, American Football Coaches Association, National Youth Sports Program, Black Coaches Association, Kappa Alpha Psi Fraternity, and the Unique Lodge #85 PHA Charlotte, NC. Off the field, Coach Sterling’s a devoted father to his 14 year old daughter, Anna Marie Sterling, who is an outstanding student athlete in her own right. Coach Sterling enjoys reading books that are spiritually motivating, music, and hunting. He is very committed to his God given talent and works hard in maintaining a strong and positive attitude as an exceptional leader and strong proponent of students receiving a quality education.

The Burke High School community is very excited about all that Coach Sterling brings to the table. With only two seniors expected to be on the team this coming year, the Bulldogs are young. With Coach Sterling’s experience, the Burke athletic department feels confident that he will be able to turn around a struggling program. Burke fans are truly looking forward to a positive and productive season. 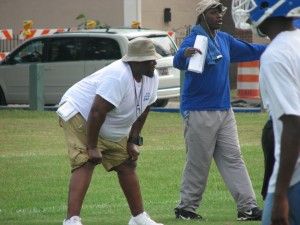 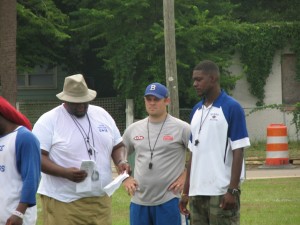