The Modie Risher Classic evolved from the Burke Invitational which was started by Coach Modie Risher in 1967. The Burke Invitational came to be because the inner city high schools were left out of the Charleston County Tournament which was then held at the College of Charleston. In Coach Risher’s Mind, the fact that inner city  teams were not included was an unfair sign of the times, and as he has done all his life, he set about to make a positive change for our entire community. In the mid-1970’s, Coach Mack Drayton and his tourney committee changed the name to the Modie Risher Classic in honor of our beloved Coach Modie Risher. This years field will include teams from Pennsylvania and West Virginia as well Summerville, Swansea, Lexington, Colleton County, and your beloved Bulldogs. 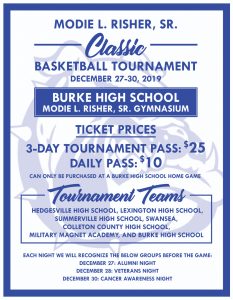 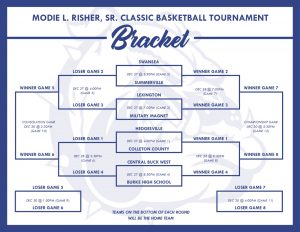 Dates: Tournament dates are December 27, 28 and 30. Please come  and show your support for Mr. Modie Risher and the Burke High School Athletic Department.

Tickets will go on sale during the last home game in December (9/20 vs Stall).

Prices: $25 for a three day pass or $10 for single day entree to watch the games.